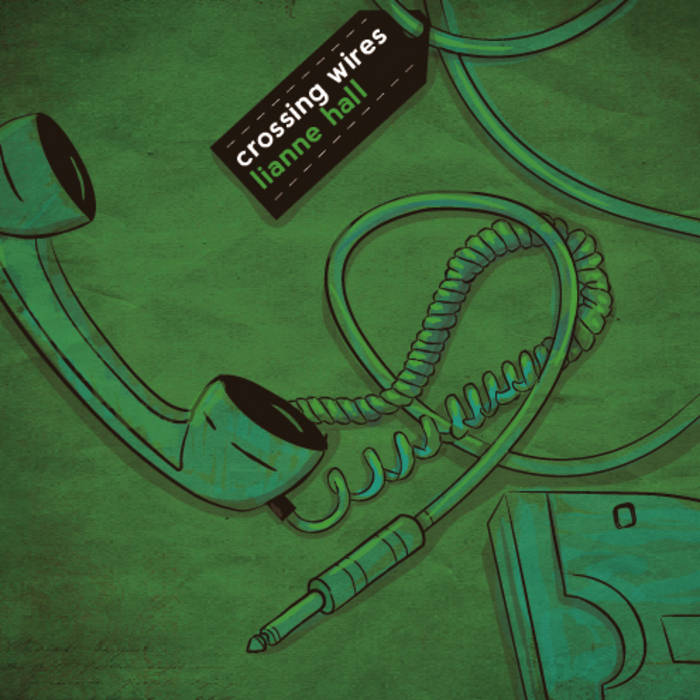 Described by John Peel as “one of the great English voices”, DIY heroine Lianne Hall releases her first album in four years, Crossing Wires, on 31st May 2010. Available on solid vinyl and ethereal download, Crossing Wires is DIY in the truest sense; she played and recorded most of it herself, and it’s coming out on her own label, Malinki.
Lianne has taken time out from recording with Orbital’s Paul Hartnoll and running the Brighton venue West Hill Hall to write, record and release Crossing Wires. “The name partly comes from being overwhelmed by the number of wires I was using to record it” she says, while the track Telephone in a Foreign City speaks of the ethics of squatting: “crossing wires is not stealing/ find the nearest empty building.”
It’s a collection of ten skilfully executed folk-pop songs, with a number of exceptional vocal performances along the way. Intro track Scissors is a break-up tale that startles with cleverly cut up phrases set to piano and subtle, crunchy beats. Telephone in a Foreign City, an unequivocal hit, bounds along to a summery pop beat. Fair Enough blends acoustica with electronica, the disarmingly measured howling of Cry Wolf further evidences the versatility of that voice, and the wistful With the Light swoops and swoons, loops and twists to the end of side one. Opening side two, echoes of Harriet Wheeler and Liz Phair collide in the faster-paced For. Richly intriguing and emotive, Learning Curves brings bass and keyboards into the mix. The mellow Fire on Tyre Beach recalls The Pastels’ later work, with expansive vocals strewn around like shards of light. Change of Heart is a string-laden country ballad inside a delicate musical box, and the album closes with the buzzing guitar and mournful chimes and Mazzy Star-esque vocals of On the Hour.
She did have a little help with the recording and mixing from her friend Simon Janes, the man behind Mary Hampton’s critically acclaimed debut My Mother’s Children. A number of musicians made contributions, including Mark Bassey’s irresistible trombone part on Fire on Tyre Beach. The album’s deeply-hued artwork is by Dana Krusche, the Berlin-based graphic artist who has created most of the images for Ladyfest Europe.


Lianne started writing songs as a teenager, and joined her first band, Witchknot, when she became involved with the riot grrrl movement in ’93. She lived in a bus for five years, making acoustic folk pop with Bela Emerson under the name Hiphuggers and electronica as Pico with bedroom producer Andy Wills. Whilst living there she met her hero John Peel when he was filming his channel 4 programme Sounds of the Suburbs, and since that meeting she recorded five Peel sessions with a variety of line-ups. In 2000 she left her bus and moved Pico to Brighton, where she formed The Broken Heart Club with Matt Eaton, Alice Eldridge and Susanne Lambert. Local Kid Records put out Abandon Ship, Lianne’s first full length album in ‘06, and around this time she met Paul Hartnoll and co-wrote a song on his solo album, The Ideal Condition. They went on tour together and have been collaborating ever since. Lianne has also been working with Newcastle’s d_rradio on Making Spaces, a CD album coming out imminently on Sentence Records.

Lianne Hall is a Berlin-based musician, from the UK.

Lianne, described by the late John Peel as “One of the great English voices,” used to be in the legendary punk band Witchknot. Since then she has played solo and as Pico, Broken Heart Club and Haunted House. Lianne has also collaborated with d_rradio (deathrowradio), Paul Hartnoll (Orbital), FITH, DJ Marcelle and Lavender Hex. ... more